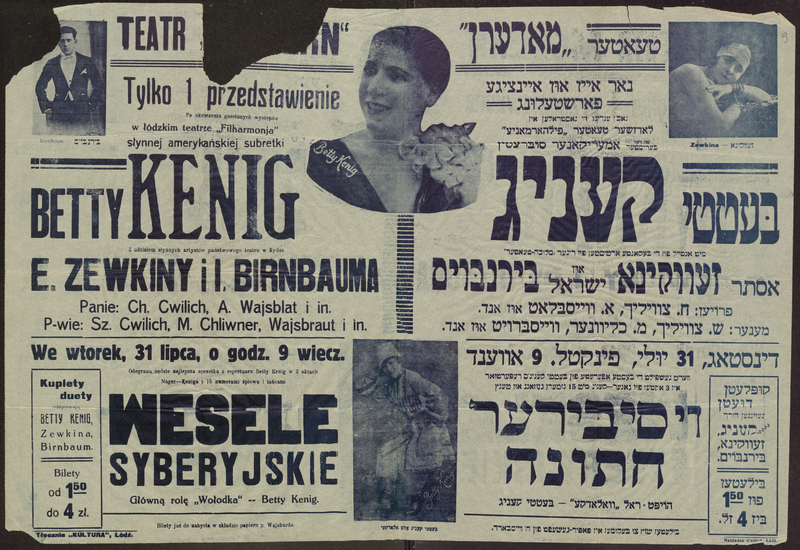 Even though the residents of the Jewish quarter could not afford expensive leisure activities, they did enjoy a variety of low-cost or free pastimes. People made use of the few green spaces available to them. The younger generation, especially, was drawn to vaudeville performances and the movies. Other lowbrow entertainments— “freak shows,” circuses, and performances by wrestlers and strongmen—attracted large audiences.

For those who could spend money on more cultured diversions, Łódź offered many opportunities to attend concerts of Jewish music and Yiddish-language theater. In fact, it was not unusual for several different Yiddish theatrical performances to be offered at the same time on various stages.

Vacation travel was a luxury beyond the means of most of Bałuty’s residents, but that did not stop them from seeking refreshment and adventure. When they wanted a change of scenery, they turned to the natural areas and parks close to home.

Bałuty’s children could discover nature through summer camps organized by Jewish congregations or the city administration. Held in the nearby villages, these camps introduced children to a wide range of activities. Sometimes the residents of the Jewish quarter made the hour’s trek to the Łagiewniki forest, northeast of Bałuty. Today, Łagiewniki is incorporated into Łódź and is the largest urban forest in Europe.

Ah, How Pleasant It is! [Ach, jak przyjemnie!] 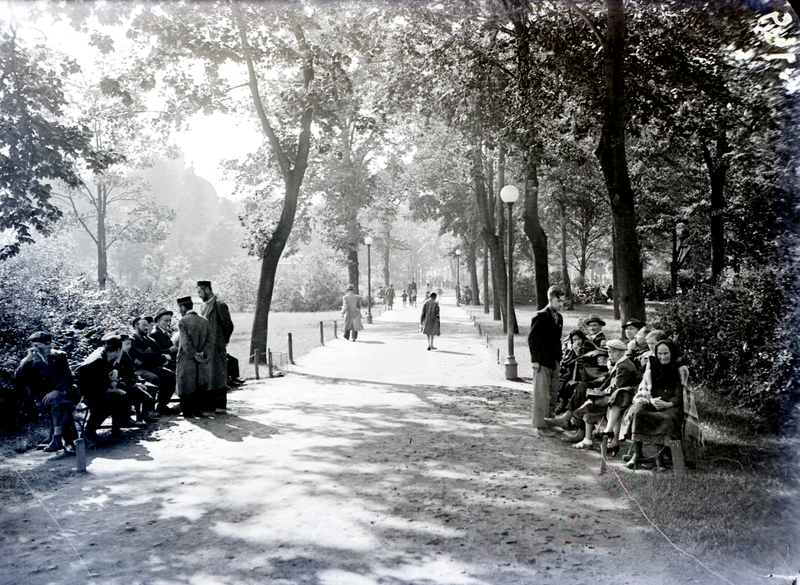 Green spaces were notoriously scarce in Łódź itself. Each year, the municipal government planted thousands of shrubs and trees, but these quickly died because of the industrial waste in Łódź’s groundwater. The city did manage to maintain several parks. Some of these, especially Kolejowy (Railroad) Park near the train station, became regular haunts of the Bałuty Jews. Nonetheless, poor Jews (and Gentiles) were not welcome in the more affluent private parks.

Starting in 1937, the Julianów Park became one of the favorite spots for the inhabitants of the northern districts of the city. Julianów was a beautiful space for walks in every season and for water sports in the summer. There Łódź’s Jews could escape the stench and filth of their everyday environs. 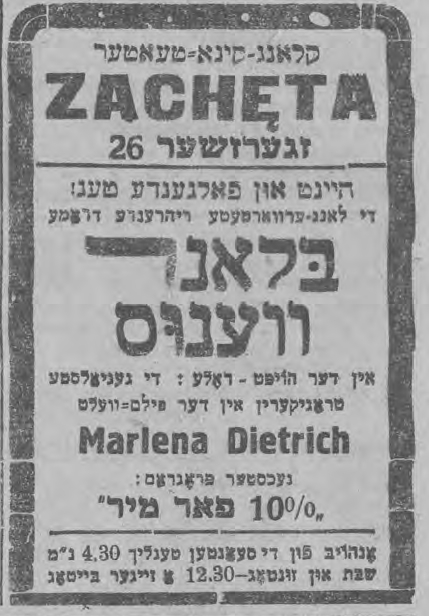 The first public cinema in Łódź opened in 1899. There, audiences could see brief film projections. Soon, even the working-class neighborhoods had theaters. For the careworn laborers, the magic world of cinema offered a refuge from the stark reality of their existence.

In 1909, Bałuty had two movie theaters; by the end of the 1930s, nearly ten. Clearly, the allure of the cinematic make-believe world was as strong for the Jews as it was for the Gentile inhabitants of the city.

East and West in Bałuty

The cinematic repertory covered a wide range of movies. Most films shown in Łódź were foreign productions—American, French, Russian, and German—with American films quickly taking over the market. Polish cinema was also on the rise. In 1933, the musical comedy Love is for Everyone (Każdemu wolno kochać) opened the era of all-talking cinema in Poland. Jewish audiences attended Polish and foreign films. At the same, Yiddish-language cinema and films whose storylines involved Polish Jews held special appeal for Jewish audiences. 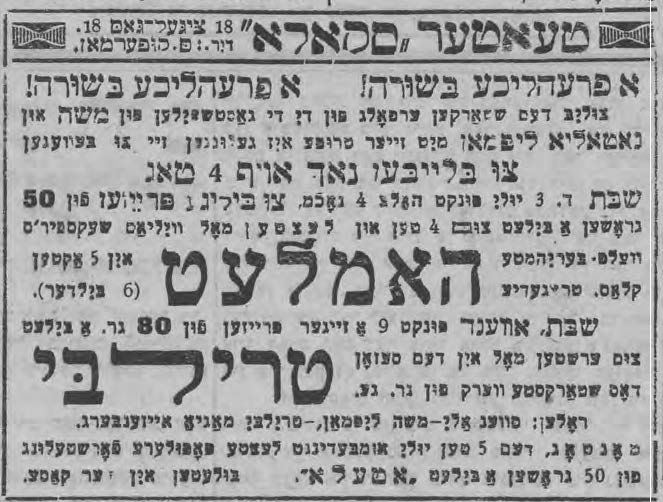 Hamlet at the Scala

Jewish audiences in Łódź attended theatrical performances in the Polish, German, and Yiddish languages. At the beginning of the century, Yiddish-language dramas, operettas, and even operas were performed by local and visiting artists in Sellin’s Grand Theater, and, later, on the Filharmonia stage and in the Scala Theater at Cegielniana Street. Yiddish repertory ranged from Goldfaden’s Shulamit to Verdi’s Aida; from An-ski’s Der Dibbuk to Shakespeare’s Hamlet.

Cabaret and vaudeville performances were especially popular with the less affluent audiences. Such lowbrow entertainment was found in eateries and at the ubiquitous dance clubs. Since the earliest presentations of moving pictures appeared within vaudeville acts and traveling exhibits, cinemas continued to serve as venues for revue entertainment. In Bałuty, such performances in Yiddish and Polish were common: in 1909, films presented in the Flora and Kassandra cinemas were part of variety shows. Both theaters (under new ownership and names) continued to double as theater venues during the interwar period.

The irreverent stepchild of theater, cabaret attracted some of the most talented artists in Łódź. The short-lived cabaret Bi-Ba-Bo featured texts by the young Julian Tuwim and Konrad Tom, and stage-sets and costume designs by Artur Szyk; among the works performed by the legendary Ararat Theater were those of its director, the poet Moshe Broderson. The favorites of local audiences were Bolesław Norski-Nożyca and the duo Dżigan and Szumacher. The humorous works that these performers presented addressed topics particularly close to the hearts of Bałuty residents: commentaries on social conditions and cultural transformations. There were also satires on the leaders who posed the greatest threat to the Jews: Mussolini, Stalin, and Hitler. 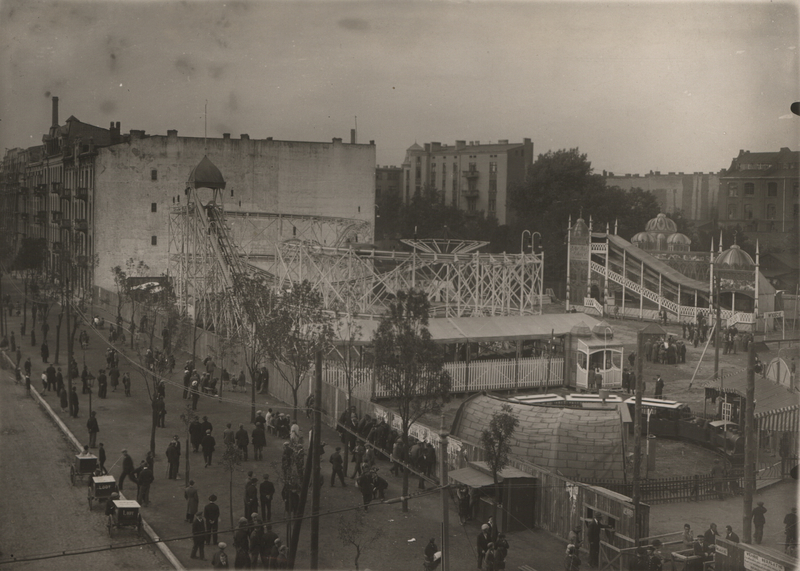 The early cinema projections and lowbrow theatrical productions were inextricably linked with other variety performances: acrobatic and juggling acts, boxing and wrestling matches, strongmen and magic shows, and traveling exhibitions. Such shows could also be seen in circuses and amusement parks when they visited Łódź.

Jewish audiences and performers were no strangers to such entertainment. The most celebrated homegrown entertainer was the strongman Zishe Breitbart, who was born in Stryków near Łódź and who rose to international fame. Known as “the King of Iron,” in Poland, Breitbart was also called “Samson from Łódź.” When directed at his heavily Jewish audiences in Poland, Breitbart’s feats of superhuman strength were often staged as scenes representing ancient Jewish heroes.

Exhibitions of curiosities also attracted Jewish audiences. These presentations took the form of dime museums, animal collections, flea circuses, and freak and geek shows. Itinerant entertainers drew in audiences eager to experience the supernatural or to get a taste of faraway, exotic worlds. Unscrupulous impresarios did not hesitate to put human deformities on display while promoting them as marvels of nature. New technological inventions—such as moving pictures—were often embedded in these spectacles that purportedly showcased natural and supernatural phenomena.